Dr. Alex Jimenez, El Paso's Chiropractor
I hope you have enjoyed our blog posts on various health, nutritional and injury related topics. Please don't hesitate in calling us or myself if you have questions when the need to seek care arises. Call the office or myself. Office 915-850-0900 - Cell 915-540-8444 Great Regards. Dr. J 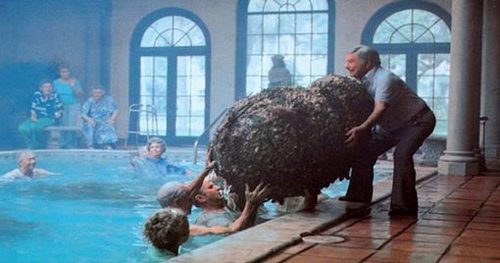 Cocoon is a 1985 American science fiction, comedy-drama film directed by Ron Howard, which tells the story of a group of elderly individuals who are rejuvenated by aliens. In the film, the Antareans, a civilization of ancient, peaceful beings, had set up an outpost on planet Earth, on an island that later became known to mankind as Atlantis. But, when the mysterious island of Atlantis sank, several Antareans were left behind, staying alive by confining themselves inside large, rock like cocoons in the bottom of the Atlantic Ocean.

Then, a group of these aliens returned to Earth to collect the cocoons left behind, charging the water of a pool next to a retirement home with a special type of life force to give those Antareans that stayed behind the strength to survive the trip back home. And, when a group of seniors become exposed to these waters, they begin to absorb the alien life force, making them feel younger and stronger than ever before.

Cocoon was a popular film at its time which filled people with the desire and wonder of being able to regain their youthful state of being. While this notion may seem to lean more towards the side of fantasy and science fiction, current medical research has demonstrated that there is one true approach which, much like the movie cocoon, can rejuvenate people and help relieve them of many injuries and conditions which may be affecting them: chiropractic care.

Chiropractic is a natural, alternative form of medicine which focuses on the diagnosis and treatment of injuries and/or conditions of the musculoskeletal and nervous systems, primarily the spine. After an initial diagnosis of the patient, a doctor of chiropractic, best known as a chiropractor, will utilize a series of spinal adjustments and manual manipulations to correct any misalignments, or subluxations, which may be causing the body to function less effectively than its originally intended plan through creation, resulting in other complications if left untreated.

Ron Howard’s 1985 film Cocoon, portrayed the existence of a rejuvenating and healing life force which could be believed to only be possible through the stories of science fiction. However, chiropractic care has been demonstrated to offer the same results, restoring an individual’s original state of mobility, flexibility and strength. For more information, please feel free to ask Dr. Jimenez or contact us at (915) 850-0900.

What is Degenerative Disc Disease (DDD)?: An Overview

Chronic Pain Throughout the United States

Nutrition and Fitness During These Times | El Paso, Tx…

Massage Therapeutics Can Improve Health and Well Being

Summer Footwear, Back Pain and What To Know

A Few Ways to Manage Chronic Back Pain During Summer

Spinal Meningitis Can Affect the Spine: What to Know

Times When Surgery for Sciatica Could Be Necessary

Chronic Pain Throughout the United States

Chronic pain is pain that does not stop and persists for weeks, months, and years. It also describes pain that continues long after the injury that caused the pain has healed. It affects millions of people with debilitating side-effects that can range from low-self esteem, depression, anger. Chronic pain costs over $600 billion each year. […]

PODCAST: Dr. Alex Jimenez, a chiropractor in El Paso, and Kenna Vaughn, a health coach in El Paso, TX, introduce Taylor Lyle, a sports dietitian in El Paso, TX, to discuss the importance of nutrition and diet for young athletes and professional athletes. Taylor Lyle discusses her experience in sports nutrition as she describes […]

As we have seen, custom and personal health plans are becoming the new way of healthcare. This is allowing healthcare practitioners like us to take an entirely new stance to better help their patients achieve optimal health and overall wellness. We now have the ability to not only run DNA tests to determine an individual’s pre-existing risk factors, but we now have the ability to test and create a personalized superfood to better optimize health outcomes.

Regenr8 is a company that developed an Epigenetic Biomarker Profile test to assess where your body is lacking in essential vitamins and minerals, hindering proper expression of biochemical pathways. The test determines the impact of your environment based on your unique gene function by identifying various metabolites based on the meta

PUSH-as-Rx ®™ Beyond Rehabilitation For All - No Matter The Age

We use Specialized Chiropractic Protocols, Wellness Programs, Functional & Integrative Nutrition, Agility & Mobility Fitness Training and Cross-Fit Rehabilitation Systems for all ages. We are focused on restoration of mobility, flexibility, agility and power after being injured. Restoration of a pain free life is our goal for our community and patients.

As an extension to dynamic rehabilitation, we too offer our patients, disabled veterans, athletes, young and elder a diverse portfolio of strength equipment, high performance exercises and advanced agility treatment options.

PODCAST: Dr. Alex Jimenez, Kenna Vaughn, Lizette Ortiz, and Daniel "Danny" Alvarado discuss nutrition and fitness during these times. During quarantine, people have become more interested in improving their overall health and wellness by following a proper diet and participating in exercise. The panel of experts in the following podcast offers a variety of tips and tricks on how you can improve your well-being. Moreover, Lizette Ortiz and Danny Alvarado discuss how they've been helping their clients achieve their optimal well-being during these COVID times. From eating fruits, vegetables, lean meats, good fats, and complex carbohydrates to avoiding sugars and simple carbohydrates like white pasta and bread, following a proper diet and participating in exercise and physical activity is a great way to continue to promote your overall health and wellness. - Podcast Insight

Nutrition and Fitness During These Times | El Paso, Tx (2020)

Ryan Welage and Alexander Jimenez, Both Medical Students discuss new approaches to working out. Using their advanced understanding with functional movements they undertake explaining simple methods to complex movement protocols.
-
If you have enjoyed this video and/or we have helped you in any way
please feel free to subscribe and share us.

The Functional Fitness Fellas | What is it? & Who Are They?

-
If you have enjoyed this video and/or we have helped you in any way
please feel free to subscribe and share us.

PODCAST: Dr. Alex Jimenez, chiropractor in El Paso, TX, and Victoria Hahn discuss the fasting-mimicking diet and the ProLon Fasting Mimicking Diet program developed by Dr. Valter D. Longo. The ProLon Fasting Mimicking Diet is a high-fat, low-calorie intermittent fasting diet that may promote fat loss and reduce blood sugar, inflammation, and cholesterol, similar to other fasting methods. Valter D. Longo is an Italian-American biogerontologist and cell biologist known for his research studies on the role of fasting and nutrient response genes on cellular protection aging and diseases as well as for proposing that longevity is regulated by similar genes and mechanisms in many eukaryotes. Only a few research studies have been carried out to date regarding the fasting-mimicking diet and more research is needed to validate its benefits.  - Podcast Insight

Our Purpose & Passions: I am a Doctor of Chiropractic specializing in progressive, cutting-edge therapies and functional rehabilitation procedures focused on clinical physiology, total health, practical strength training, and complete conditioning. We focus on restoring normal body functions after neck, back, spinal and soft tissue injuries.

As an extension to effective rehabilitation, we too offer our patients, disabled veterans, athletes, young and elder a diverse portfolio of strength equipment, high-performance exercises and advanced agility treatment options. We have teamed up with the cities premier doctors, therapist and trainers to provide high-level competitive athletes the possibilities to push themselves to their highest abilities within our facilities.

We’ve been blessed to use our methods with thousands of El Pasoans over the last three decades allowing us to restore our patients’ health and fitness while implementing researched non-surgical methods and functional wellness programs.

Our programs are natural and use the body’s ability to achieve specific measured goals, rather than introducing harmful chemicals, controversial hormone replacement, un-wanted surgeries, or addictive drugs. We want you to live a functional life that is fulfilled with more energy, a positive attitude, better sleep, and less pain. Our goal is to ultimately empower our patients to maintain the healthiest way of living.

With a bit of work, we can achieve optimal health together, no matter the age or disability.

Join us in improving your health for you and your family.

It’s all about: LIVING, LOVING & MATTERING! 🍎